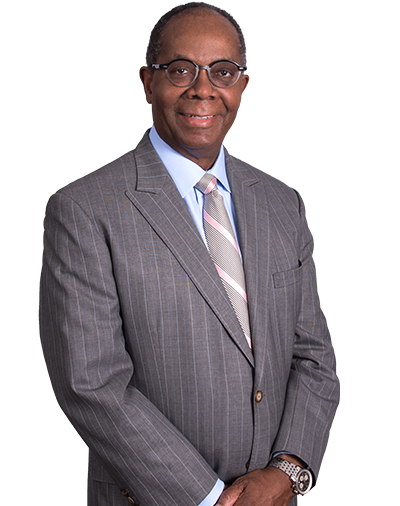 Larry James has been at the heart of the Columbus business, legal, civic, and political scene for the last thirty years. He is a respected litigator, as well as an advisor to local and national leaders. In recognition of his many achievements, the law firm changed its name from Crabbe, Brown, Jones, Potts & Schmidt to Crabbe, Brown & James in January 2001.

He has experience in many practice areas but is an expert in business and corporate law, general defense litigation, and employment law. Larry works with clients to navigate Ohio’s administrative agencies and their complex rules and regulations. Larry is a life member of the Sixth Circuit Judicial Conference, and he has served as General Counsel of the National Fraternal Order of Police since 2001, which represents 365,000 members nationwide.

In addition to his role as Crabbe, Brown & James’ Managing Partner, Larry is Co-Founder of the African American Leadership Academy, which is dedicated to increasing the number of African American leaders in central Ohio. Previously, Larry served as President of the Lincoln Theatre Association Board and President of the Martin Luther King Jr. Center for Performing & Cultural Arts, as well as a Board Trustee for the Greater Columbus Arts Council, Columbus Museum of Art, Columbus Zoo and Aquarium, and Columbus Urban League. He also helped establish the Columbus Bar Association’s minority clerkship program

Mr. James’ leadership in arts advocacy and civil rights has led him to be recognized with numerous awards over the years. Recently, Larry was honored with the Columbus Bar Association’s Professionalism Award in recognition of his long history of exemplifying the highest standards in the legal field. In addition, Larry and his wife, Donna James, were presented with the 2022 Harrison M. Sayre Award presented by the Columbus Foundation in recognition of their incredible generosity and philanthropic contribution to central Ohio.

Represented the Ohio Department of Developmental Disabilities in the Southern District of Ohio in a class-action suit involving the ADA and Medicaid Act (Ball, et al. v. Kasich, et al.; Case No. 2:16-cv-282).

Won summary judgment on behalf of the City of Columbus Police Department Vice Unit in the Southern District of Ohio in a § 1983 case asserting various constitutional violations (Icon Entertainment Group a.k.a. Kahoots v. Rosser, et al., Case No. 2:20-cv-101).
Represented multiple applicants to Ohio’s Medical Marijuana Control Program in Chapter 119 administrative appeals before the Ohio Department of Commerce including the successful appeal resulting in the award of a license in In re CannaMed Therapeutics Processing, LLC; MMCP-P-2017-0084.

Represented several members of the Ohio State football team during the 2010 and 2011 events known as “tattoogate.” This included representing Terrelle Pryor, DeVier Posey, Boom Herron, Mike Adams, and other Ohio State players in the NCAA’s investigation into allegations that the college athletes had received improper benefits, including allegations that a number of players had traded football memorabilia for tattoos.

Presents Biennial Reports as General Counsel for the National FOP highlighting and providing guidance on the current status of pending cases, legislations, and discussions that have the potential to impact police officers responsibilities and duties. (Last Biennial National Conference August 15-20, 2021).

Columbus Metropolitan Club’s Forum: Racism – “Where Do We Go From Here? Policing In the Community: Does the Past Dictate the Future? (August 19, 2020 – Columbus, Ohio)

Participant in conversations with community leaders in Columbus, Ohio including the Franklin County Commissioner’s Meeting and the Columbus Urban League. (Also featured in the Columbus Dispatch and Bloomberg Law).

Spearheaded the fundraising efforts for the Columbus Museum of Art to honor Aminah Robinson’s legacy through the preservation of her home to serve as a site for future artist residencies.